How did fans react to the resumption of the season and what did they think about the winning teams? Neticle dove deep into football’s online world to investigate.

After shutting down for two months due to the coronavirus pandemic, the matches of the German Bundesliga resumed in May despite many fans opposing the resumption of the season. The atmosphere wasn’t the same inside the stadiums either: matches had to be played behind closed doors and with strict safety measures. The final matches were on the 27th of June.

We at Neticle wanted to know how these events were reflected on the German web: was the opposition really that serious around the otherwise hugely popular football league? What kind of opinions were formed around the individual teams?

To find out, we collected the mentions of the top 4 teams (who achieved UEFA Champions League qualification) from the 1st of May, and also created a general ‘Bundesliga’ keyword to help create a more nuanced analysis.

During the past two months, Bundesliga had almost half a million mentions on the German web, with large spikes in mention numbers during May, especially on the 16th – at the resumption of the season – when the mention count of the day surpassed 25 thousand.

On that day, 21% of the mentions were negative, and it is no surprise that “Neustart” and “Coronavirus” were the most heavily featured topics.

Nevertheless, fans were absolutely engaged in the conversation: there were 14 million interactions (ie. likes/reactions, comments and shares/retweets) on the posts about Bundesliga on the 16th. Engagement wasn’t low on other days either, it was between 100 thousand and 1,5 million interactions per day.

Nobody on the German internet could avoid the news about Bundesliga: posts reached between 48 million and 168 million users every single day throughout May and June.

Online mentions did not go hand in hand with table positions

The top four teams this season were Bayern München, Borussia Dortmund, RB Leipzig and Borussia Mönchengladbach (in that order). Interestingly, the winning team did not have the highest number of mentions, these were collected by the second best though. The third and fourth place in mention numbers is also reversed in comparison to their final position on the table.

The highest peak in both Bayern München’s and Borussia Dortmund’s mention numbers was on the 26th of May, when they played a match against each other. The second highest peak for Dortmund was the 27th of June – another match day, this time against Hoffenheim. Dortmund lost both matches.

The losses did not go down well with the public opinion: their online reputation took serious blows each time they lost a match during May and June, including the 17th of June when they lost 0:2 against 1. FSV Mainz 05, a team that’s well below them in ranking. Afterwards, when the 0:4 loss against Hoffenheim came, the negative peak was even larger.

Bayern München’s negative peaks were nowhere near as serious, however, overall in the examined period, they had even more negativity appear in their mentions then Borussia Dortmund. Most of the negativity came from forum mentions on transfermarkt.de. This was a very active site regarding the other teams, too.

The negativity on the forum threads came from multiple reasons and topics – namely, a lot of general game tactics debate and what the team should or shouldn’t do. Some even claimed that Bayern München should not participate in the Bundesliga because they are too good compared to the other teams, and then other forum members were infuriated by this. A hot topic throughout June was the leaked news that the club has signed with Leroy Sané from Manchester City, which got confirmed on the 1st of July by Bayern, accompanied by apologies to ManCity for the leak. This gives further advantage to Bayern for the next Bundesliga season, and many fans think that they should have paid a higher price for the player.

Out of the four teams, only Mönchengladbach ended this period with a positive online reputation: it gave them a real positive kick when they beat Hertha Berlin 2:1 on the 27th of June and landed at fourth place. RB Leipzig also had about 30 times less negativity in their mentions than the top two teams. Their two negative peaks were due to two tied matches, one with SC Paderborn 07 and the other with Fortuna Düsseldorf.

Fans were much more engaged with online content in May

The individual teams’ reach and interaction numbers show that even though there were still lots of mentions in June, the greatest hype around the teams occurred in the second half of May, in the weeks after the season resumed.

This is especially true for Borussia Dortmund, but Bayern München’s engagement and reach also visibly decreased by the second half of June. Borussia Mönchengladback and RP Leipzig, on the other hand, did quite well in June, especially the former, due their positive results. However, no matter the success, they could not outdo the top two teams’ engagement and reach. 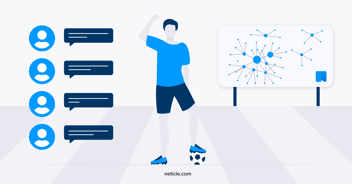 Short but not sweet: the story of the Super League in Germany’s online world

In just three days, the rise and fall of the Super League rocked the world of football. Could the... 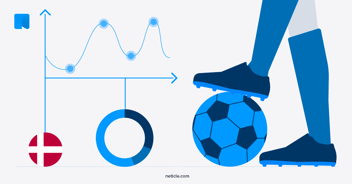 A nation united under a hashtag: #Herrelandsholdet

Denmark’s national football team did exceptionally well in the EURO 2020 tournament, and it shows...