Man is a social (media) animal

With 63% of the world’s population using the internet, the amount of content posted online is mind-boggling. The role of Big Data analysis is more important than ever, and you need good tools if you want to thoroughly understand opinions in news and social media.

Whether we like it or not, the online space has become the basis of our content consumption, be it propelled by a desire to hear the daily news, entertain ourselves, or research a topic/product. Content consumption naturally goes hand-in-hand with content production, which of course also happens vastly in the digital world.

The switch from printed media, radio and television to computers, tablets and of course smartphones happened gradually, from the first appearance of the term Web 2.0 in 1999, and then with digital devices becoming more easily accessible and (especially) affordable to basically anybody during the previous decade. However, it is undeniable that the process has sped up even more in recent years, with the COVID-19 pandemic forcing a digital shift in all areas of life out of necessity - which then solidified. Cyber security firm Akamai, for instance, noticed a 30 percent surge in internet traffic globally in 2020.

According to a survey done by Pew Research the same year, 86 percent of U.S. adults said they got news from a smartphone, computer or tablet at least sometimes (including 60 percent who say they do so often). Television and radio still played a role with 68 percent and 50 percent respectively, but the player with the greatest disadvantage was definitely print publications, with just 32 percent. News consumption habits are also heavily influenced by age. Only 3 percent of U.S. adults between the ages of 18-29 got news often from print publications. (That also means that – as we will see shortly – advertisements are usually much more effective on online platforms than in printed materials.)

However, the newest trend that lots of research companies have warned about is actually a disinterest in news overall, due to wars, the pandemic and the climate crisis, just to name a few of the topics people in general can’t take anymore. According to the Reuters Institute for the Study of Journalism, in the UK in 2022, 46 percent of people say they often or sometimes actively avoid the news, which is nearly double the figure in 2017 (24 percent). Social media is the winner of this situation, especially in the case of Gen Z (and soon, Gen Alpha), whom newsrooms need to work harder than ever to reach, as they are less interested in politics and even define news in a different, more decentralized way.

Based on DataReportal’s July 2022 summary, 59 percent of the world’s population now uses social media. This almost completely overlaps with the ratio of internet users, which is 63 percent. Social media is now more than a side door to news consumption: people are now two and a half times as likely to turn to social media for news as they are to turn to physical newspapers and magazines. This is especially true for the younger generations, who prefer this method of hearing about the world because they allow more space for subjective narratives, and believe that journalists should also be able to express their opinions besides reporting on events.

But what they also extensively turn to social media for is brand research. Depending on which demographic group we’re looking at, between 28 to 50 percent of internet users gather information about brands from social media platforms – women under 24 are the most likely to do so. Social media platforms know and capitalize on this fact: Meta’s advertising tools show that brands can reach more than 1 billion people using ads on Instagram. However, online shopping has seen the most significant increase not among young people but in the older generations, who may have tried it for the first time during the pandemic, but continue to make more online purchases now that restrictions have ended.

If you’re a marketer, you need to know what’s going on on social media

Search Engine Watch also emphasizes the fact that due to the rise of online shopping and the amount of time people spend on social media, social media highly impacts consumer buying decisions. Everyone can contribute to other people’s buying decisions by writing reviews, sharing posts and generally interacting with content.

People love seeing social proof of a product or service (and the reliability of news as well, for that matter), and since purchase is possible by just clicking a link after reading positive reviews, the customer journey is greatly shortened. Gen Z and Millennials are the most likely to be influenced, with 84 percent of Millennials saying user-generated content shapes their purchase decisions at least somewhat.

So, if you are a brand owner or have a product or service to sell, it is adamant that you pay attention to what is being posted about you and your competitors on these online platforms. Social listening tools can be indispensable, especially if there are (or you reckon there are) multiple online hubs where your topic or product is being discussed, or if there is a very high amount of content being posted about you. Choose a solution that will automatically gather and analyze them for you, so that you can make your marketing and sales decisions based on thorough reports.

Why is NLP beneficial?

Neticle’s products are equipped with a Natural Language Processing engine, which means both Neticle Media Intelligence and Zurvey.io can help you navigate the noisy and crowded online space, sparing you hours of tedious work. They will make it easier for you to use a more personal tone with your audience, since you’ll have a much clearer idea of what they enjoy or what’s bothering them.

The Voice of the Customer can be heard through various channels in the online space besides social media, such as email, instant messaging, or application reviews. As the general volume of the online conversation grows, these channels also receive an influx of feedback, so you cannot afford to neglect them. Next to your social media data handled by Neticle Media Intelligence, Zurvey.io can analyze all these other, more direct channels, too. 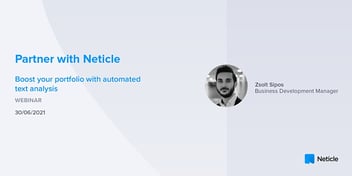 Looking to add innovative, scalable, and cutting-edge products to your software or service... 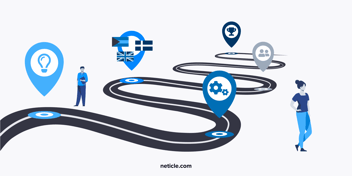 More languages & smarter products: resilience in the face of adversity

Neticle heavily relied on one of the company’s core values in 2021: flexibility. We developed all... 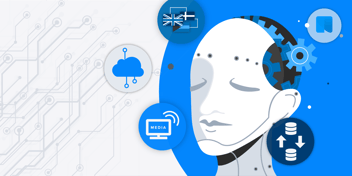 Today, technology plays a significant role in fueling the entire world’s shift into a more dynamic...