Neticle’s analysis reveals which fans were the most delighted and who were left disappointed, as well as the popular players and notions related to the games.

The FIFA World Cup Qatar was played from 20 November to 18 December 2022: 32 teams competed across 64 matches, at the end of which Argentina became the World Champion for the third time. The event kept millions of fans engaged, excited and rooting for their favorite teams before the holiday season. They naturally generated hundreds of thousands of mentions on social media, which we just couldn’t ignore, so here’s our social listening analysis of one of the world’s most watched and commented championships.

Internet users were especially active in the UK and Germany, but we also collected mentions from Poland, Switzerland and the Netherlands throughout November and December to see what fans thought about the World Cup. First, we looked at the most engaging content (the posts that got the highest volume of interactions, such as likes, reactions, shares and comments), and zoomed in to see which players were featured the most.

In the UK, Liverpool FC’s posts were the most successful in this regard: the club regularly posted about the performance of its players in the world cup, such as Brazilian goalkeeper Alisson Becker, and England’s midfielder, Jordan Henderson. The Polish loved TikTok videos mentioning Wojciech Szczęsny and Aymeric Laporte. In Germany, several of Magenta Sport’s TikToks were among the most popular, mentioning Richarlison and Mbappe, but Thomas Müller’s Instagram also generated a huge amount of engagement. The Swiss reacted to SRF News’ post about Xhaka, after his infamous crotch grabbing scene at the match against Serbia.

There was one thing common in all countries: the tweet mentioning the performance at the opening ceremony by Jung Kook from the South Korean band BTS got loads of retweets everywhere, regardless of nationality.

Delightment & disappointment: ups and downs during the World Cup

With Neticle Media Intelligence’s sentiment analysis, we’ve created the Web Opinion Index (WOI) chart of the examined countries, depicting the mood regarding the championship throughout November and December. There were undoubtedly some major ups and downs, often related to the national teams’ performance. 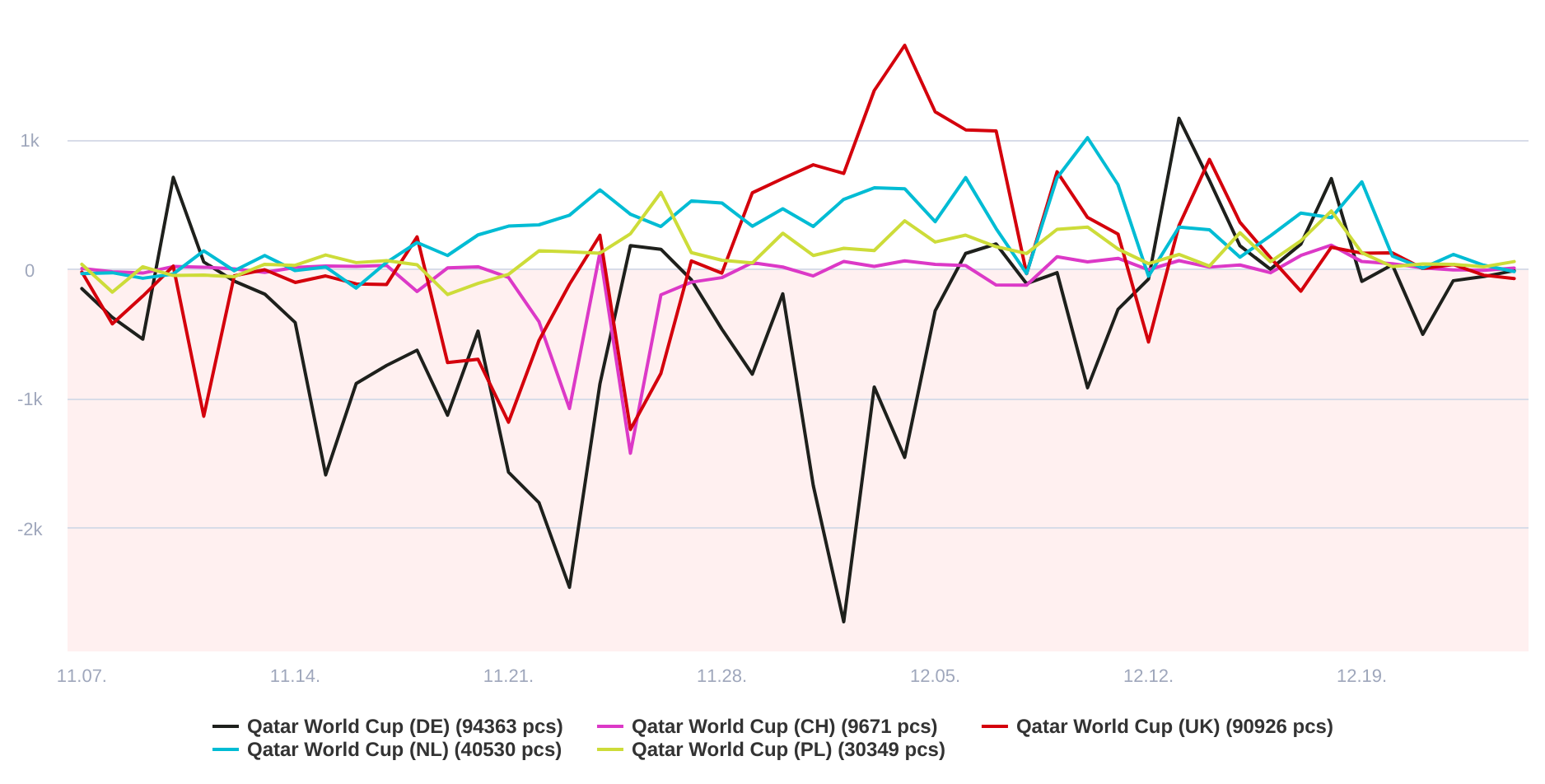 On November 23, Germany lost a match against Japan, causing a big dip in the chart, but everyone, including German fans congratulated Japan. A highlight of the day was when Japanese fans at the stadium even helped clean up the stands after the match.

The biggest fall of the opinion index on the 2nd of December is of course due to Germany’s early exit. At this time, Coach Flick and Niklas Süle both received heavy criticism. Overall, it is no wonder that the mood in Germany remained sad during most of the championship.

The UK on the other hand both had high and low points. Their biggest WOI fall is related to their 0-0 match against the USA on the 25th of November, while the highest peak on the 4th of December came when they beat Senegal 3 to 0.

Phil Foden created as many chances against the USA as Raheem Sterling, Mason Mount and Harry Kane.

Fans got disheartened again on the 12th when the team lost against France and exited the World Cup.

Switzerland mostly remained in the negative zone, except for their win against Cameroon on November 24. Polish fans on the contrary stayed positive throughout, despite their team’s two losses, one win and one tie. However, their losses were against very strong teams including Argentina, so they did not have much to be ashamed of.

The Dutch were even more positive than the Polish, and they celebrated other countries’ wins, too. A beautiful moment from the 10th of December, when Morocco beat Portugal, appeared in a tweet that became super engaging in the Netherlands. 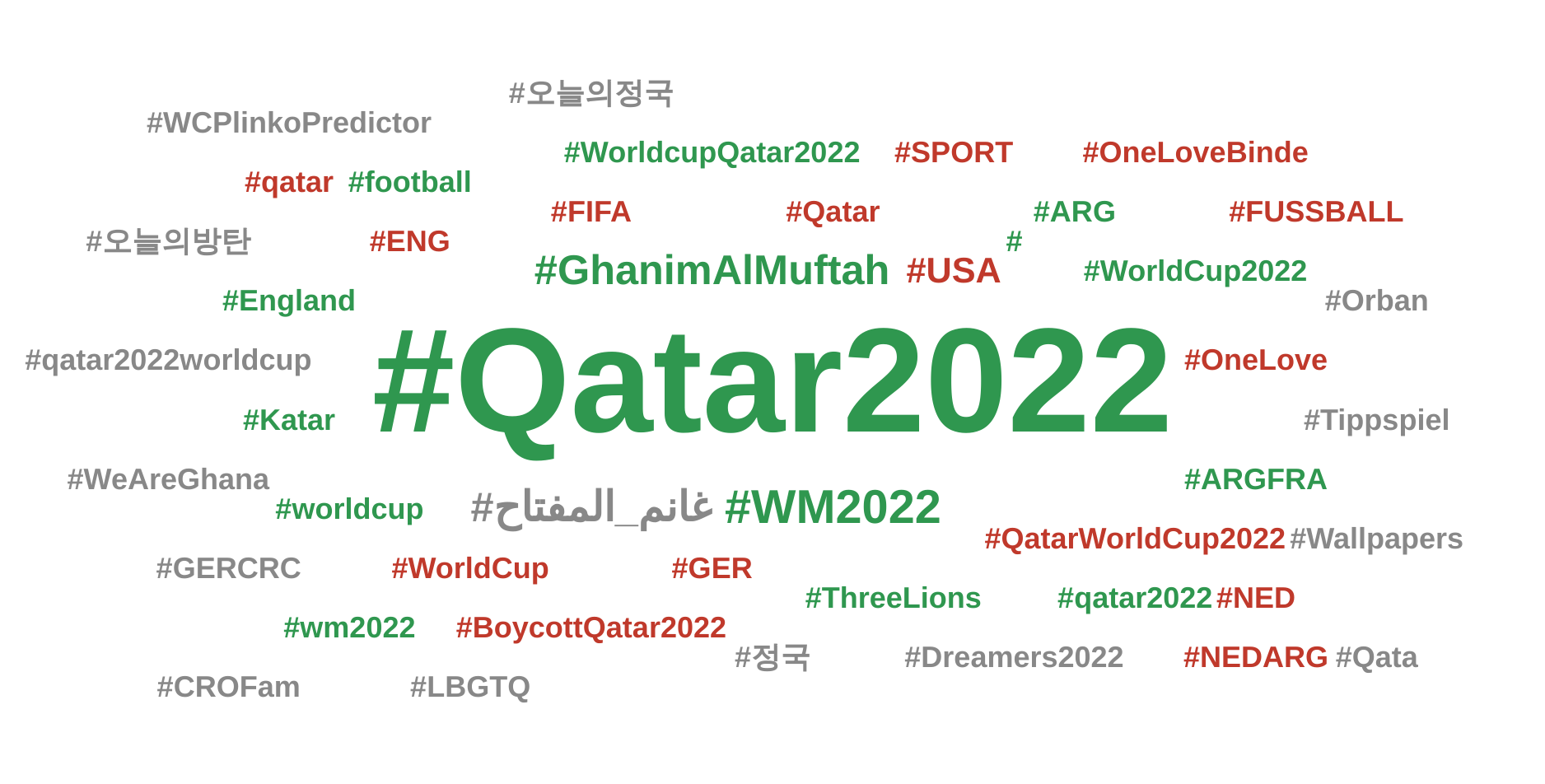 The hashtag cloud above was created from the most common hashtags used in the examined countries in relation to the World Cup. Their colors reveal the overpowering sentiment of the mentions collected under them. Some of them are quite obvious, but let’s see some of those that reveal important trends related to the event.

Neticle’s social listening analysis can show you the reception of any sports event – this is just the tip of the iceberg. Do you have a team or a sports campaign you want to find out more about? Are you working on your sports marketing strategy for 2023?

Create your own analysis with Neticle Media Intelligence!

Do you know how much a social listening analysis can reveal?

We’re giving readers an exclusive glimpse into Neticle’s work and services: you can now download a...