The company’s collapse has generated huge waves of articles and quite a lot of social media posts. While their shares lost more than 90% of their value, their online reputation also reached negative peaks never seen before.

For over a year now, Financial Times have been reporting that the German fintech company Wirecard AG was faking some of its revenue. Up until recently, the company had pushed back saying that this was only a conspiracy against them with short sellers, and this tactic proved successful. In the middle of June, however, Wirecard failed to publish audited results for 2019 and it became public that one of their bank accounts - that was supposed to have €1.9 billion in it – is missing.

A huge scandal blew up and while it is still far from over, we decided to take a closer look at Wirecard’s appearance on the German web. We collected their mentions from the first of May: Wirecard actually had a fair share of daily mentions even before the scandal started, but then the amount tripled.

The 18th of June is the first mention peak: at this point, the missing €1.9 billion had been discovered, the shares’ value began to severely drop, and the survival of the company was questioned. The next day, CEO Markus Braun (who had taken over the company in 2002) resigned.

The next and also largest mention peak on the 22nd of June is the result of the news that for the first time, Wirecard acknowledged that the €1.9 billion of cash never existed. The same day, Markus Braun was arrested, and he also sold about a million shares of his company (which he needed for bail). After a night in police custody, he was released for a deposit of five million euros. Finally, the 25th of June brought along the news that Wirecard had no choice but to file for insolvency, by this time, the company’s stocks dropped to a hundredth of their previous value.

The initial negativity became even worse

The drops in online reputation mostly followed the mention peaks we have seen, however, the worst day for Wirecard in this regard was the 29th of June. On this day, the media reported that the shares have become the game ball of speculators and the shares began to gain value, triggered by the announcement that the board of directors is continuing the business despite the application for insolvency. Some articles labelled this as a bad omen for the German financial scene and called Wirecard the Banana Republic of the country.

While the online reputation took a skydive, the number of potentially reached users was sometimes four times as high as before: on the same day that the largest mention peak happened, the reach of the news was almost 40 million.

In the last two months, more than 58% of Wirecard’s mentions came from articles, 11% of which were even on the frontpages. Social media was less involved in comparison: Facebook, Twitter and Instagram together only make up about a quarter of the mentions. The ratios only slightly change if we strictly look at mentions from the time when the scandal broke out.

Interaction data further supports this: even though there was of course a very significant rise in users’ engagement, the interaction per social media mention ratio is quite low. Another interesting tendency is that at the beginning of the scandal, the ‘like’ number on posts was much higher than towards the end, when ‘share’ numbers picked up and the biggest negativity wave came.

The decline of Wirecard’s online reputation is largely due to articles, too. Facebook mentions did contain some negative opinions and users on various forum sites also joined in the discussion, but journalists were about 6-7 times more critical than social media users.

It is also visible that the negativity wave is not yet over: as German authorities are still investigating and more and more details of the case are being uncovered, Wirecard is still very likely to come up in articles and analyses in the near future. 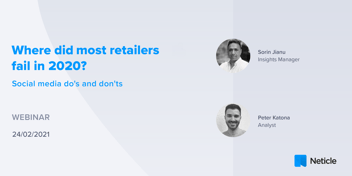 Where did most retailers fail in 2020?

What are the key drivers behind negative reviews? How could companies learn or even benefit from...